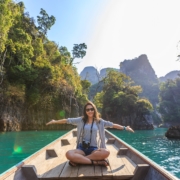 As the United States heads into the depths of winter, many begin to think about leaving their frigid homeland for a foreign paradise. While most people are not in a position to drop everything and retire to island life, the rising popularity of remote work has allowed more people than ever to pursue a more nomadic lifestyle abroad.

These “digital nomads” come from all walks of life, but sharing similar goals of traveling the world, exploring new places, and supporting their interests and hobbies through a location-independent lifestyle. While spending weekends on the beach and evenings strolling a foreign promenade sound magical, as a U.S. citizen there are some important things you to know before you buy your plane ticket.

1). It’s not always as easy as hopping on a plane or train

Americans are privileged to have some of the strongest passports in the world. There are more than 160 countries that US passport holders can visit without needing a travel visa — just board your transportation of choice with your passport and you’re good to go!

That said, there are some countries like China, Pakistan, Saudi Arabia and Russia, among others that require a visa and passport to enter. While some visa-requiring countries like Cambodia or Vietnam allow for e-visas or on-site visas, others require this paperwork to be completed ahead of departure.

P.S. If you’re looking to make a  get-away, here is what you need to know about passport validity and traveling for U.S. citizens!

2). Even if you aren’t living in the U.S., Uncle Sam is coming for your money

Ben Franklin once wrote that “…in this world nothing can be said to be certain, except death and taxes.” and for U.S. citizens that holds true, even if they aren’t living in the United States.

Generally speaking, the US government doesn’t really care where you live or make your money when it comes to taxes — as long as you pay your taxes. The rules for filing income, estate, and gift tax returns and paying estimated tax are usually pretty much the same no matter where you reside.

This can mean that if a traveller isn’t careful about choosing their new home wisely, they can be taxed by the US and the country they are physically located in. There are a couple of “solutions” to this issue including using a “foreign earned income exclusion” or special business/corporate structures that can be established to help reduce this burden. To find out more about those, it’s best to contact a trusted lawyer and/or accountant with expertise in this area.

3). You’re going to want to look into healthcare

While those looking to make a move abroad in 2019 no longer have to think about the tax implications of not having healthcare (thanks to the effective repealing of the individual mandate in the 2019 tax bill), it is still something to be carefully considered.

Many US-based health insurers offer little to no coverage for those living, even temporarily, abroad. While there are many countries across the world have universal healthcare, they are under no obligation to provide those services to non-citizens. Coverage can also come from unexpected places. In some cases, credit card companies offer medical care coverage services (including helping to cover air transport back to the United States), so make sure to investigate all possibilities.

4). Beware of driving… for many reasons

In general, avoiding driving overseas is the best option. Road signs, signals, and even which side of the road to travel on can vary by location so it’s often in your best interest to avoid the issue altogether.

In the event you choose to drive yourself in another country, it is important to have the proper credentials.  While some countries like the United Kingdom and Ireland honor U.S. driver’s licenses, many others do not. For these countries, an International Driving Permit may be required. In the United States, these can be obtained fairly from the National Automobile Club or the American Automobile Association (AAA).

5). The power struggle can be real

One of the biggest surprises can come from the most mundane of places. While appliances in the United States run primarily on 110 volts, countries abroad use anywhere from 110- 240v. Additionally, the standard for plugs in the US is two elongated vertical openings, sometimes with a third half-round hole below, while other parts of the world use very different electrical plugs. This is all to say, that don’t plan on your electronics working in other countries as is. Thankfully, a rather inexpensive and convenient solution can be found at most hardware or large retail shops: converters and adapters. These simple devices can manipulate the current so your devices can use the electricity coming from the power supply as well as modify the outlet so that your plug can fit. Be sure to pack a couple before you head out on your trip!

Living abroad, even temporarily, can help to expand your horizons, open you to new experiences, and introduce you to new people and ways of life you had never imagined. Have you ever lived abroad? Any tips you would like to share? Let us know in the comments!