You are here: Home / stay safe and warm 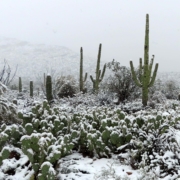 In 2019, the city of Redding, CA received more snow in a single day than Boston had the entire season. Last year, sunny Tucson, AZ — where the average temperature is 84°F — experienced snow.

While every place experiences winter, being prepared for winter’s worst is no longer limited to northern states. Whether you’re in Albuquerque or Atlanta, San Antonio or Scottsdale, take these cold weather tips to ensure you’re ready for whatever comes this winter.

Slipping on ice — not so nice.

Warmer states tend to have more of an ice problem that colder states. This is because these states and their residents are often less prepared to deal with ice, but also because temperatures can hover right around freezing. It might be rainy and in the 40s one evening in Georgia, only to freeze overnight and turn driveways into the world’s worst slip-n-slide.

Stock up on at least one of the following things — even if you don’t use them this year, they’ll last for years to come:

A bag of water softener salt can also work in a pinch, but your best bet is rock salt.

Put down some paper — invest in a scraper.

True story: this writer was living near Phoenix, AZ, then traveled to Colorado and learned the hard way that she didn’t have a car scraper.

A car scraper is the best and quickest way to get rid of snow and ice on your windshield. Even if you don’t use a scraper this year, even if you think defrosting will work just fine, you just never know! There are countless scenarios and places where a scraper will come in handy. Drop the 10 or 15 bucks now for a lifetime of protection.

Show your hands love — get some gloves.

Living in a warm place and buying the proper winter attire doesn’t make you weak, it means you’re smart! There’s no reason to suffer months of mild cold, because mild cold is still “cold.” Consider getting a warmer jacket, a pair of gloves, a headband or hat, and winter boots. Again, even if you don’t use them now, there’s a good chance you will at some point.

Traveling near or far — stock up your car.

Breakdowns do happen. Road closures occur. No one wants to skid into a ditch on a particularly frosty night, but unexpected occurrences don’t wait for when you’re ready.

Pack up your car with the following things to ensure you’ll be set for winter:

Another true story: This writer was in a car that broke down on a country road at 8 p.m. on a Sunday in February. It took more than an hour for AAA to arrive and the battery was dead. Everyone in the car was so grateful for blankets!

Cold weather tips might seem pointless if you’re not in a place with cold weather, but recent years and patterns have shown otherwise. Ice storms, blizzards, and cold snaps can happen to anyone, anywhere.

Wherever you are, RealtyHive is your local real estate expert. Whether looking for a home in super sunny El Centro or wanting to tough it out in Montana, our real estate listings have it all.