You are here: Home / Montserrat 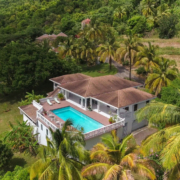 In the summer of 2019, a private seller came to RealtyHive with an interesting property. Named Fern Court and located in the Woodlands area of Montserrat, the seller had inherited the property and had been trying to sell it for years.

Not many people know about the idyllic island of Montserrat. Located in the Caribbean island chain called the Lesser Antilles, this small island is just 10 miles long, 7 miles wide and home to nearly 5,000 people. Montserrat has been nicknamed “The Emerald Isle of the Caribbean” for it’s resemblance to coastal Ireland, but unlike Ireland there are no direct flights from the United States, Canada, or United Kingdom to the smaller island nation.

In 1995, the Soufrière Hills volcano, located in southern central region of the island became active and began to erupt. This eruption eventually led to the capital city of Plymouth being covered in more than 39 feet of mud and debris. The seismic and volcanic activity continued for years destroying the island’s airport and ravaging the tourism industry. The most recent period sent pyroclastic flows down several sides of the mountain from November 2009 to February 2010.

This volcanic volatility led to the creation of the exclusion zone encompassing the entire southern half of the island. A variety of settlements were abandoned either by the eruption of 1995 or the flows of 1997 and still more were evacuated and later resettled. Among these is Woodlands.

So here we have a small, hard to reach island with recent volcanic activity and a seller who needs to sell a property worth several hundred thousands of dollars. Challenge accepted. With a few pictures and videos from the on-island agent partner, RealtyHive was able to begin marketing the property.

By the time Fall 2019 rolled around, Fern Court had a verbally accepted offer, but as anyone who has lived in the Caribbean can tell you, things down there tend to happen on island time. By Winter 2019, the sellers had a written contract and in early 2020, the property had closed!